Friends of Arrow Rock is dedicated to the conscientious conservation of Arrow Rock’s historic buildings, and has restored and maintained 13 properties. 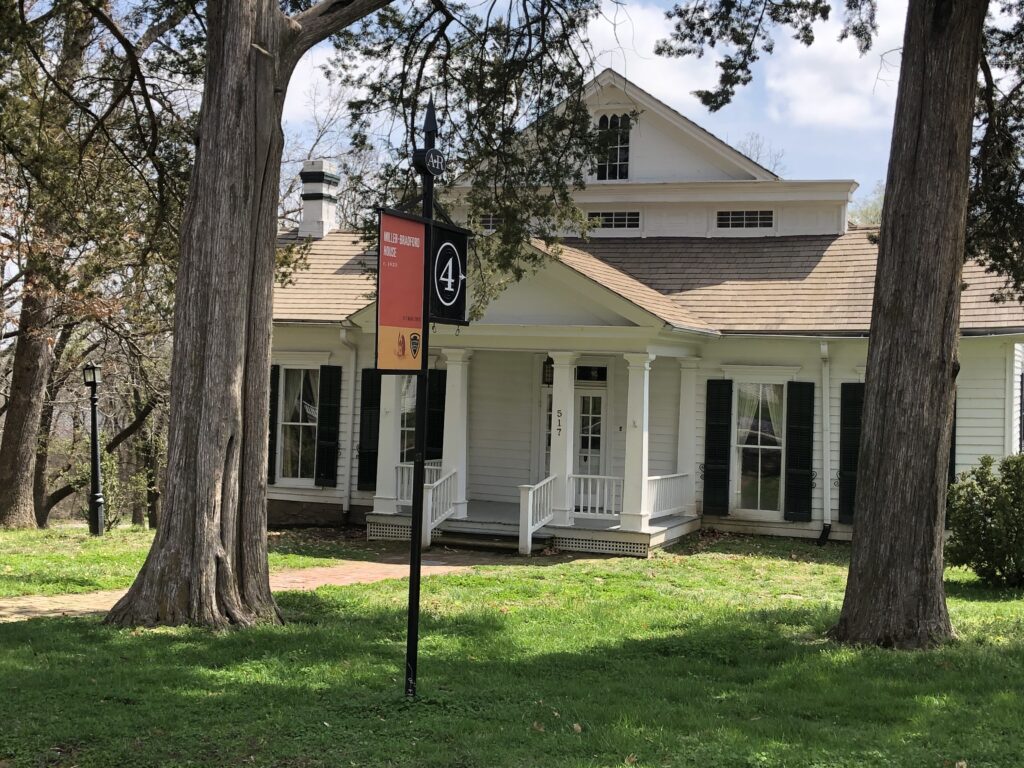 Originally a modest home built by Samuel Miller, c. 1839, it was enlarged by Dr. Charles Bradford in the early 1840s. Dr. Bradford had come to Arrow Rock in 1840 and married a granddaughter of Dr. John Sappington. Bradford added rooms to the back, and a slave kitchen was attached to the house, creating two stories at the rear with a walkout basement. The original walnut siding still exists.

The house remained in the Bradford family until 1898. By the mid 1950s, the house was deserted and in a state of disrepair. In 1957, Bill and Cora Lee Miller purchased the property with plans to restore it as their home, but when someone asked if there was a place to buy antiques in town, Cora Lee set out a card table with a few items and Miller’s Antiques was born. The business took off and before long, Miller’s Antiques had gained a reputation as one of the finest antique shops in the Midwest. It was a great honor when Friends of Arrow Rock received the gift of the Miller-Bradford House and the contents of Miller Antiques. Friends of Arrow Rock continues to care for this property. It currently houses the Missouri Folk Art Shop & Gallery. 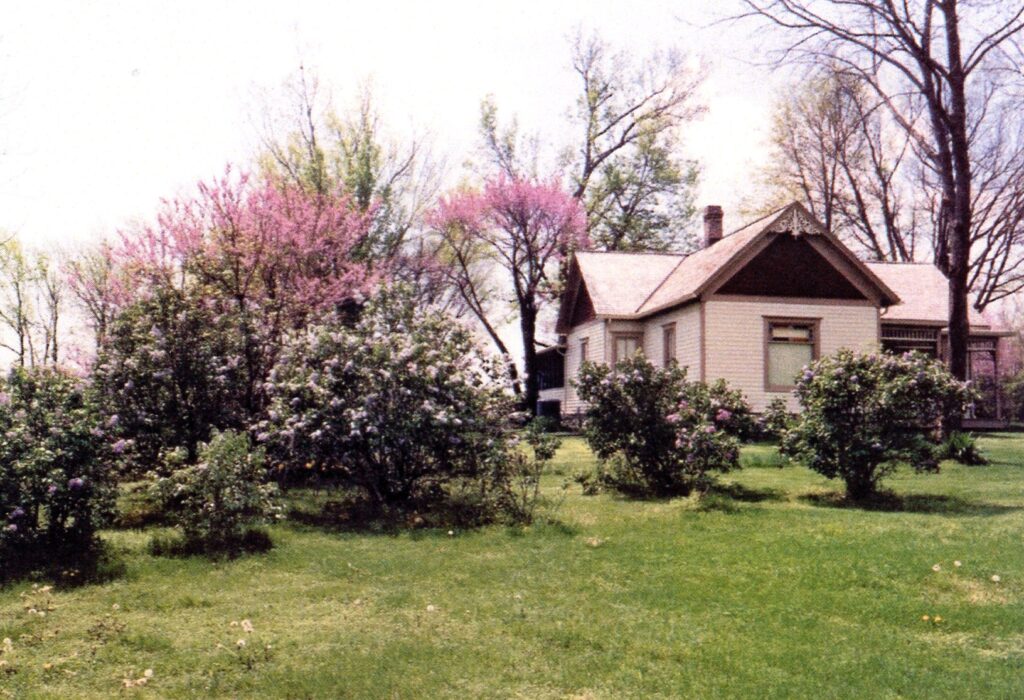 The Lawless House is a tie to an Arrow Rock founder and represents a new era of farming in Saline County. In 2000 and 2001, the Friends of Arrow Rock received a substantial gift from Life Member Gladys Thomas for the restoration and maintenance of the Lawless House located at the edge of Arrow Rock. Owned by the State of Missouri, Department of Natural Resources, the Friends signed a long-term lease on the property for the purpose of restoring the circa 1903 Queen Anne farmhouse that was built by her grandfather, D. Lawless.
The Friends of Arrow Rock restored the home to its period of significance. The property is currently used as an educational center for the Missouri River Bird Observatory. 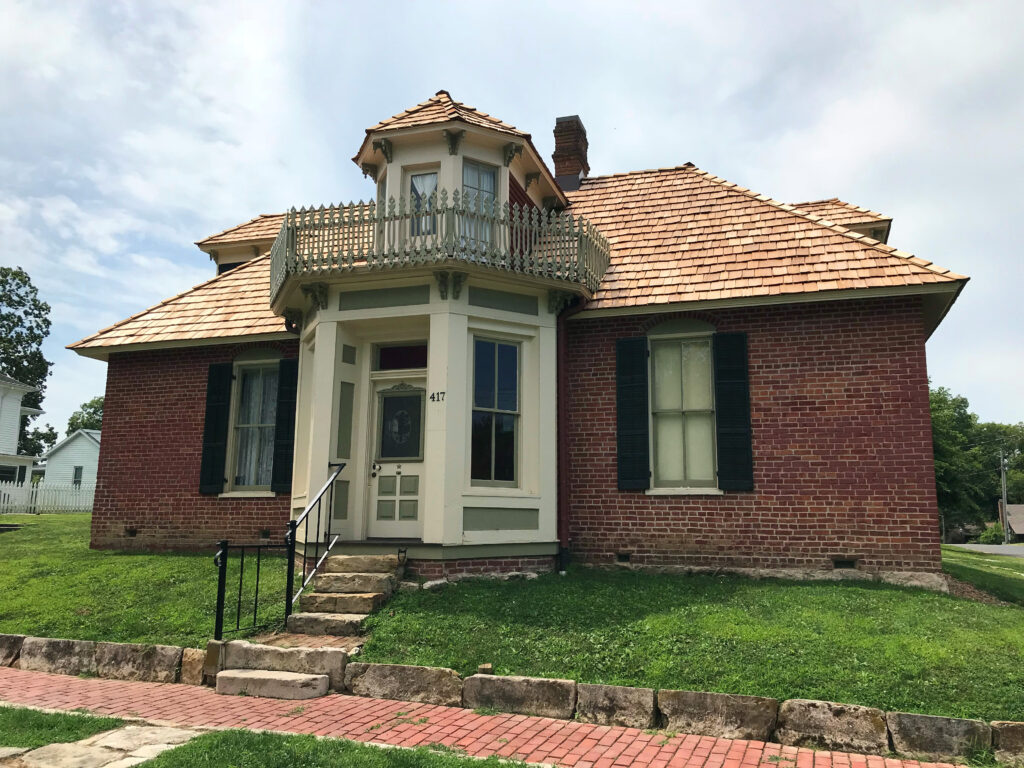 The downstairs of this house dates from the 1830s, when it was built as a Federal-style cottage. Johnny and Nannie Sites bought the house in 1866, and by the mid-1870s, they had remade it into a country Victorian home. They literally raised the roof and added two bedrooms upstairs and a more elaborate front porch.

When Johnny and Nannie Sites died without heirs shortly after the turn of the century, their belongings were sold and no records have been found to document their home furnishings. When Friends of Arrow Rock restored the home in 1970, the committee focused on furnishing the home with the kinds of items that would have been available in Arrow Rock. Successful second restorations of both the Sites Gun Shop and House in 1991 earned the Friends of Arrow Rock the Albert B. Corey Award, the highest national award given a local historical organization by the American Association of State and Local History 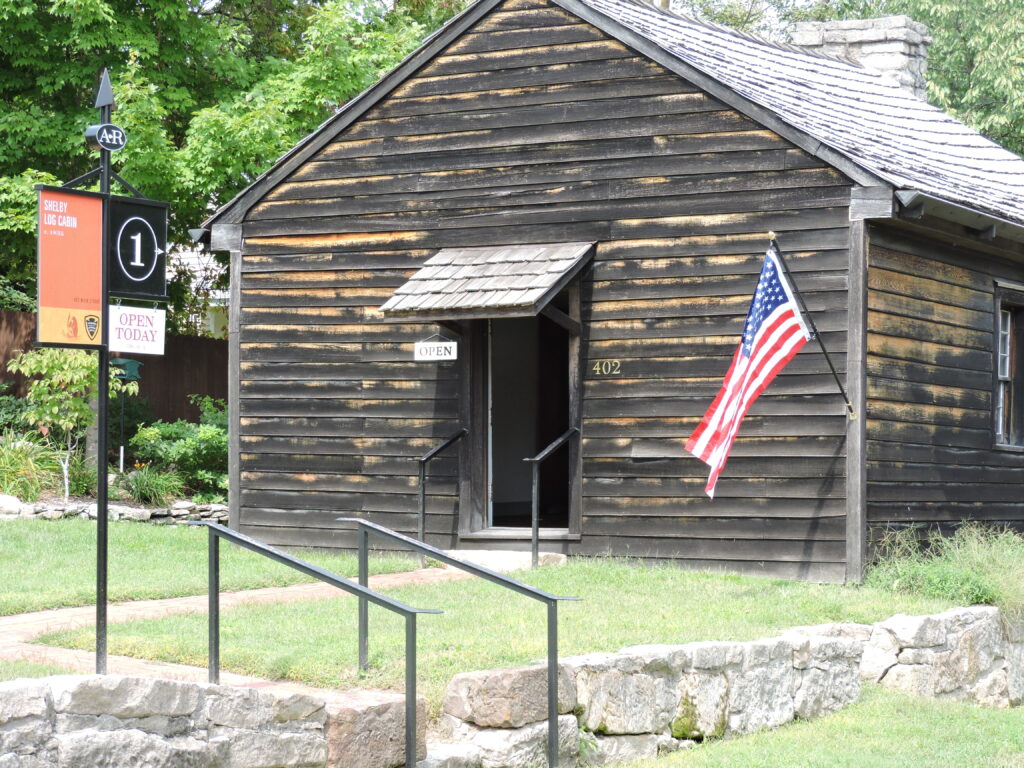 It may not look like the log cabins you’re used to seeing, but in fact this is a common style log cabin of the early part of the 19th century. Logs were “squared” and placed one upon another. Clapboards were placed on the outside to protect the logs from weather and to provide additional insulation. In this case, walnut siding was used with a linseed oil applied for protection. Lathe and plaster were often added to the inside walls. This log cabin was built in 1835, one year later than the J. Huston Tavern. It was part of a larger log cabin home that originally stood in what was known as the “Shelby neighborhood” six miles southwest of Arrow Rock. In 1972, this structure was donated to the Friends of Arrow Rock by Roberta Lanier (Cordell) Smith, a great-granddaughter of its builders, Richard and Rebecca Shelby. The building was taken down log-by-log and reconstructed where it now stands by 86-year-old master carpenter J. Logan Buntin.

Young Johnny Sites journeyed with his family to Cole County, Missouri and then on to Boonville where his father plied his gunsmithing skills. It was from his father that Johnny learned his trade. In 1844, at age 23, Johnny Sites moved to Arrow Rock where he became the town’s gunsmith and one of the most skilled artisans in the country. Here at the Sites Gun Shop, you could have your rifle repaired, converted from a flintlock to a percussion rifle, or buy the indispensable balls, lead, powder and caps to fire it. While most supplies were bartered for, the one cash-money outlay was usually for a rifle, and at a considerable cost. Compare a good rifle at $25-$50, while a wagon might be $60 and an acre of land $1.25.

While the shop is shown regularly on tour, to see gunsmiths at work, attend the Annual Heritage Festival the second full weekend of October. 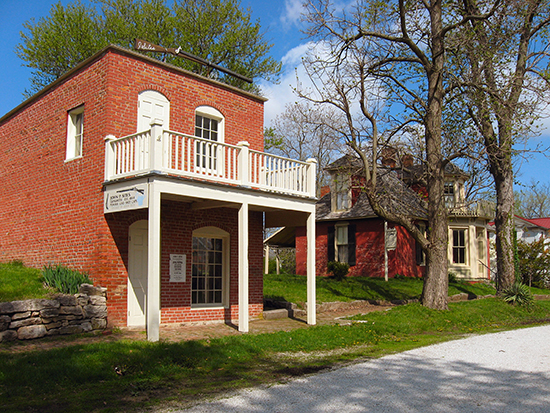 Along the block of storefront buildings known as “the boardwalk,” you will find two of our properties: the Friends of Arrow Rock headquarters and the town’s post office. Both were restored in the early 1990s  Designed by architect Stuart Hutchison, these buildings carry out the early 1900s feel while meeting the modern needs of the businesses they house.

The Friends of Arrow Rock office, which was the Arrow Rock Stock Bank from 1904 to 1927, is the starting point for seasonal tours of Arrow Rock. We also offer a variety of gifts, books, souvenirs, and local information in our Arrow Rock 1829 shop. Stop by and see the Christopher Collection of Early Missouri Firearms.

‘The first buildings on this block of the public square were built in the 1850s as two-story structures. They housed millinery shops, drug stores, banks, dry goods stores, groceries and other mercantile establishments to supply a bustling frontier town of nearly 1,000. A fire in 1901 destroyed this block; the one story buildings that were rebuilt are what you see today. 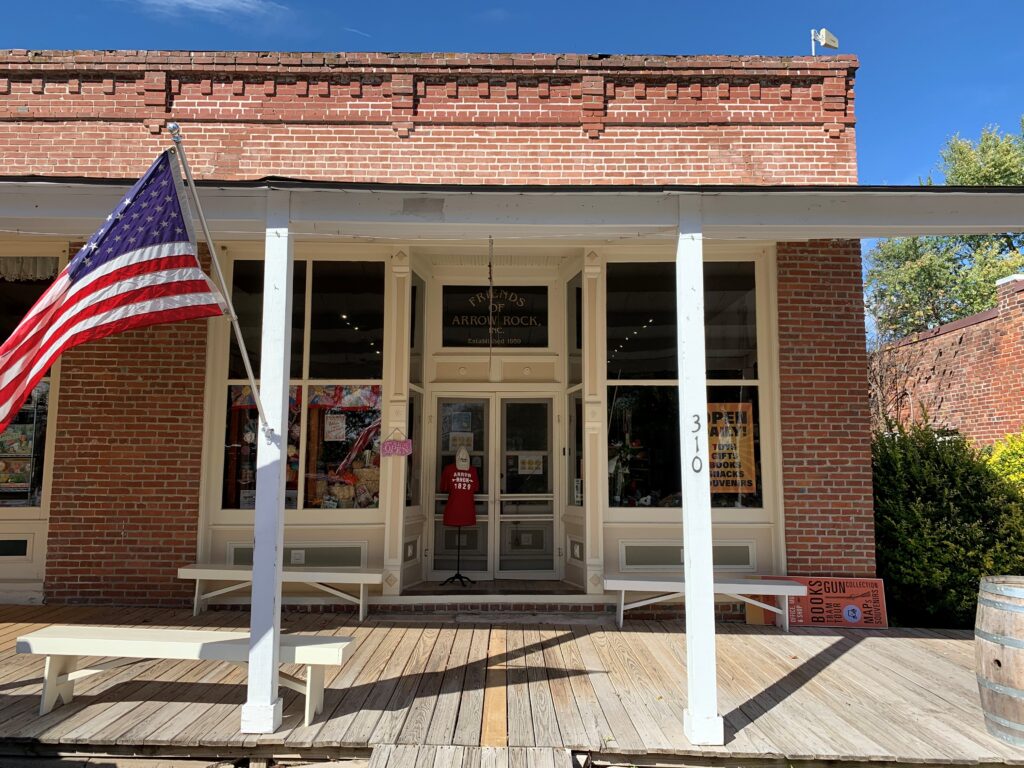 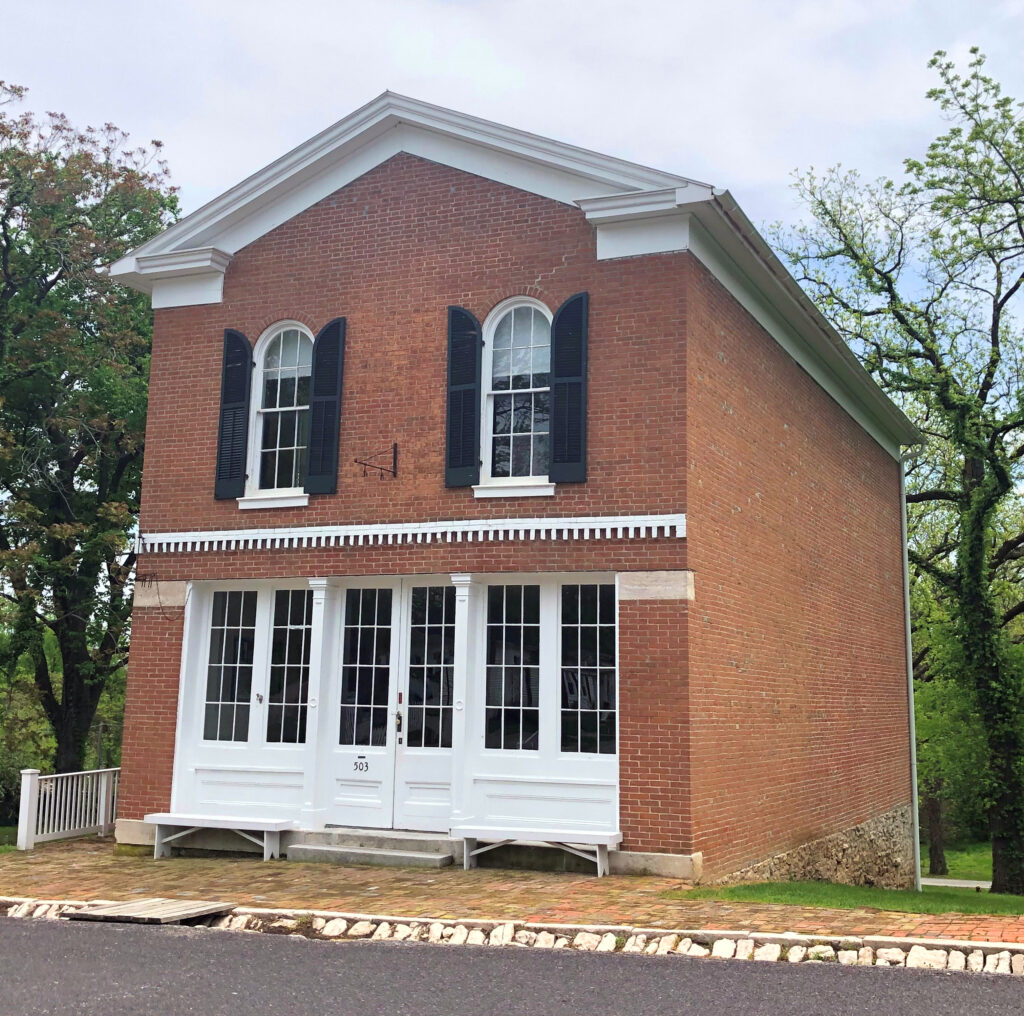 The Arrow Rock Chapter of Odd Fellows built its lodge hall in 1868 (the same year as the Masonic Lodge Hall directly across the street). Meetings were held upstairs from 1868 until 1927. The downstairs was rented out to various commercial interests, including a newspaper.

The Odd Fellows organization was started in England by working-class men for social activities, for giving aid in finding work, and in providing for a member’s family at time of illness or death (much like insurance and social welfare programs today). Their motto is “Friendship, Love, and Truth” as symbolized in three links of a chain.

The Arrow Rock Lodge was known for its winter oyster supper and summer fish fry. Missouri artist George Caleb Bingham was a member. The Lodge Hall upstairs is furnished by the Grand Lodge of Missouri I.O.O.F. The downstairs houses a collection of early printing equipment curated by the Missouri Press Foundation. 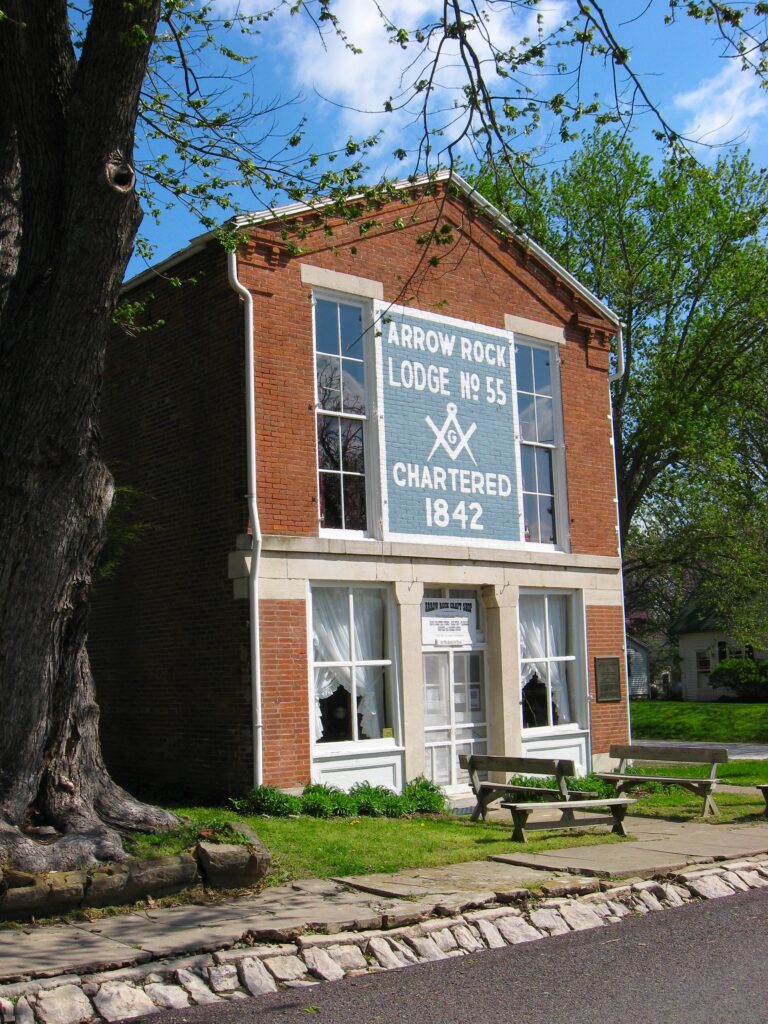 In 2007, the Friends of Arrow Rock purchased the historic two-story building on Main Street in Arrow Rock, which had been the home of Arrow Rock Masonic Lodge #55 since the building was erected by the lodge in 1868.

Distinguished members of this lodge included Rudolph Hawpe, Joseph Huston, Thomas McMahan, Henry Nave, Bernis Brown, Ezekiel F. Scott, Dr. William Price, Phillip M. Thompson, William Roper, Henry S. Mills, Dr. Matthew Hall, Dr. Oscar F. Potter, and Anthony O’Sullivan. O’Sullivan was the most widely known member of the lodge. He was initiated May 9, 1846, when he was 38 hears old. He served in numerous capacities. It was through his work as Foreign Correspondent of Grand Lodge and Grand Commandery that he became known throughout Missouri and other jurisdictions.

The still-active Arrow Rock chapter of the Masons relocated to another building in 2008. The Arrow Rock Craft Shop has been operating on the main floor of this building since 1960. In 2020, Friends of Arrow Rock completed and extensive conservation effort on the second floor, which now serves as rental office space. 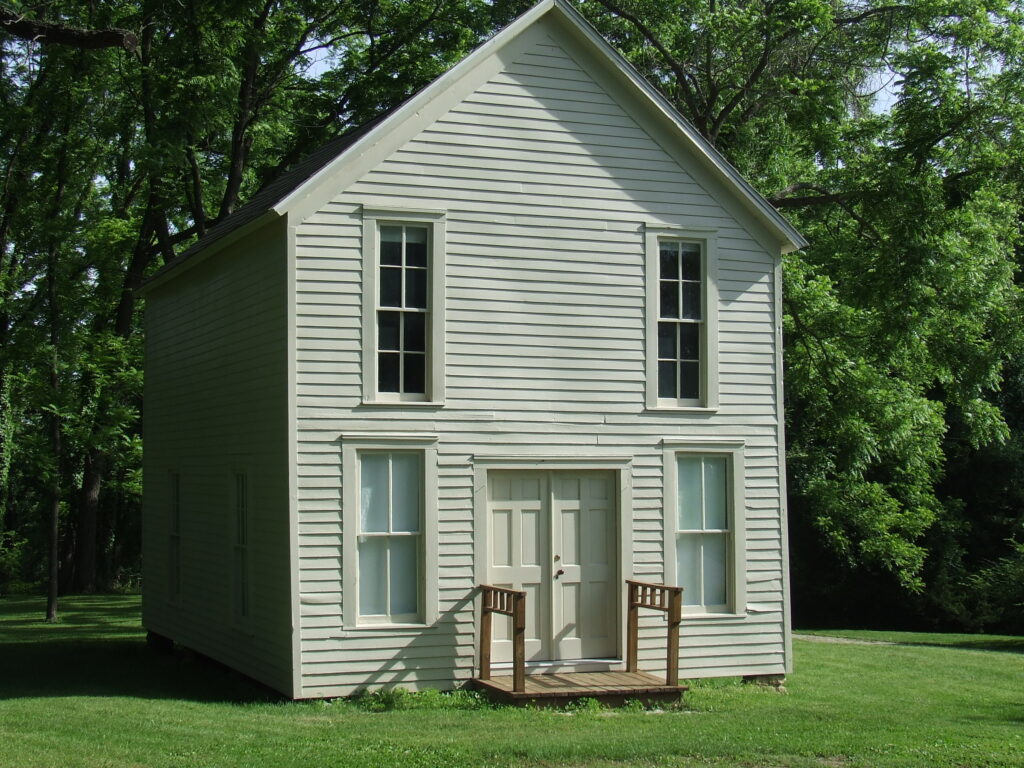 Brown Lodge No. 22 of the Ancient Free and Accepted Masons was the first black lodge to be established in Arrow Rock, maybe as early as 1877. We do know the organization purchased the land on which the lodge was built on March 2, 1881. The Ancient and Accepted Masons of the United States trace their origins to an eighteenth -century free black man named Prince Hall who established the first all-black Masonic Lodge in America in Boston, Massachusetts, in the mid-1780s. In Arrow Rock, there were at least four black lodges and three lodge halls. Brown’s Lodge is the lone remaining hall. The Great Depression forced the closure of this lodge.

After this building was vacated by its last tenant in the 1950s, it suffered from “demolition by neglect.” Virginia and Ted Fisher purchased the building with an eye on its future restoration, and donated it and Brown’s Chapel to the Friends of Arrow Rock in 1996. The building was restored and now houses a museum dedicated Arrow Rock’s Black history.

“We the undersigned do mutually agree on this the tenth day of April 1872 to unite in forming a congregation of the Church of Christ at Arrow Rock, Saline County, Missouri.”

Among the 47 people who signed this agreement were local gunsmith John Sites and his wife Nancy. Other prominent names on the membership roster were Bingham, Eastham and McMahan. The congregation remained active until the 1920s. The Great Depression took its toll on the town and the congregation dwindled. In 1937, a tree fell across the roof and there weren’t enough resources to repair it. Services finally resumed in 1948, but the church ceased to operate in 1949 and the congregation joined with others to form a federated church in Arrow Rock. 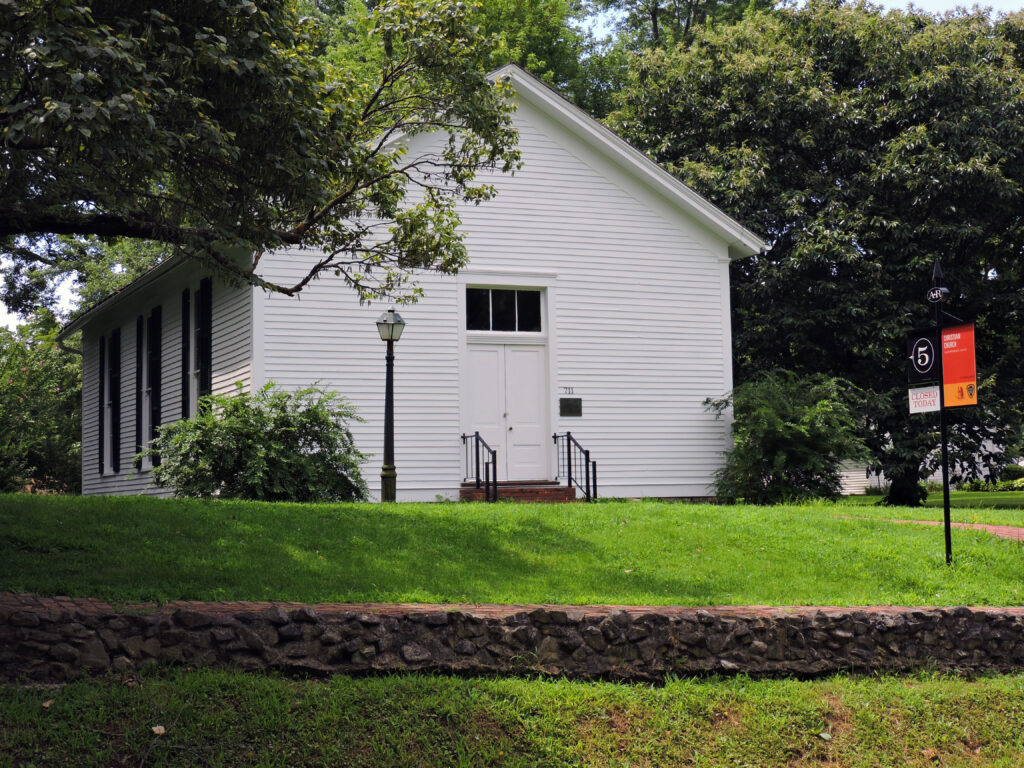 Brown’s Chapel and Brown’s Lodge are two of the newest properties of the Friends of Arrow Rock, gifts from Ted and Virginia Fisher in 1996. These are two of the last three public buildings that remain of a once vital African-American Community in Arrow Rock. (The third building is the former school, now a private residence.) Arrow Rock was predominantly settled by southern immigrants who brought with them their slaves. Following emancipation, the first community building to be erected was a church, probably as early as 1869. We believe this first church building also served as the first black school with 65 students.

The building was moved to its present location in 1883. Oral tradition tells that Zack Bush moved the building with a team of mules. Brown’s Chapel was rededicated Sept. 20, 1998, with 125 people in attendance at the Homecoming Celebration.

The building is suitable for meetings, receptions and weddings. Contact the Friends of Arrow Rock office at 660-837-3231 for more information. 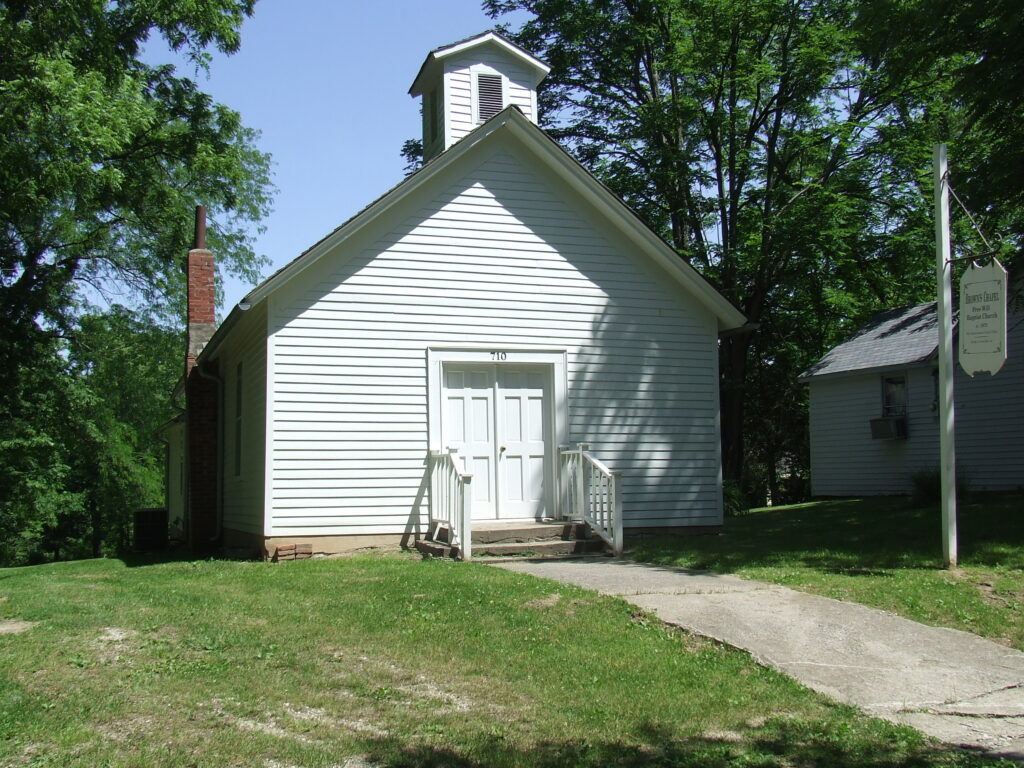 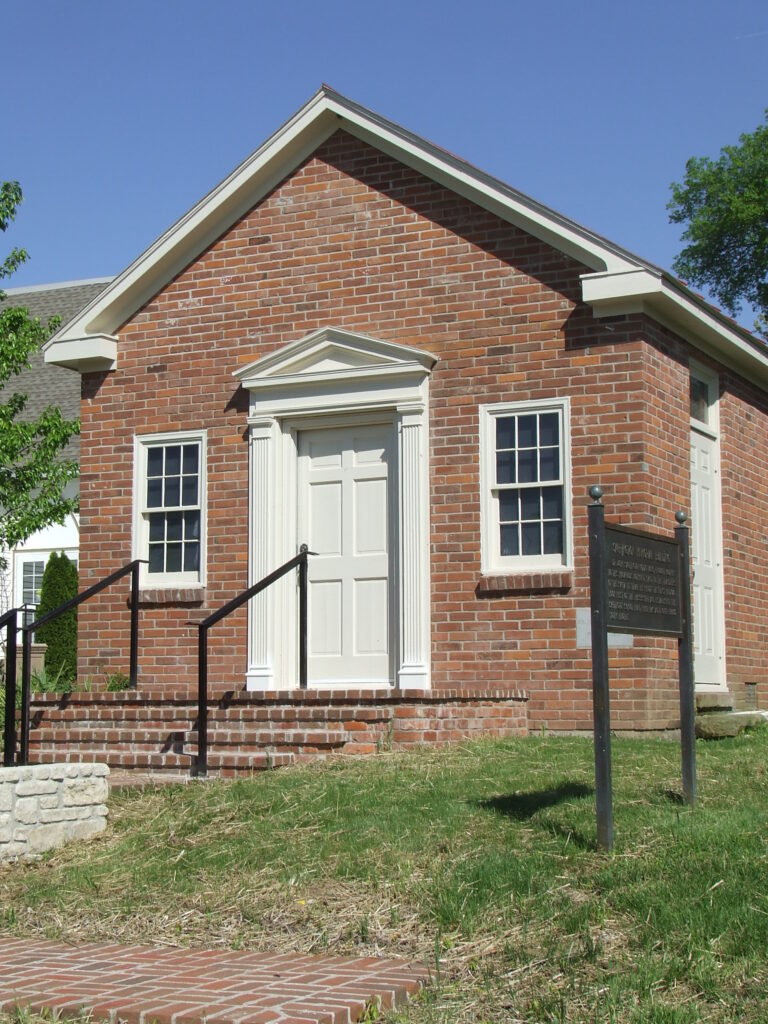 The one modern building owned by the Friends of Arrow Rock and built in typical Greek Revival architecture honors Dr. John Sappington, entrepreneur and pioneer doctor. Dr. Sappington (1776-1856) was one of the first doctors to use quinine to treat fevers, especially malaria. A nonconformist, Dr. Sappington attacked the common practice of bloodletting and began treating patients with his own “Dr. Sappington’s Anti-Fever Pills.”

In addition to his career as a medical doctor, he was a land speculator, a progressive agriculturalist, a money lender, and a political confidant in Jacksonian politics. Original portraits of Dr. and Mrs. Sappington, by Missouri artist George Caleb Bingham, are on display at the Arrow Rock State Historic Site. The site also cares for the Sappington Cemetery located five miles from Arrow Rock on Highway AA. The Sappington Negro Cemetery is also located nearby.

We are indebted to the tireless efforts of the late Dr. Thomas B. Hall Jr. for the gift of the Sappington Museum to the Friends of Arrow Rock along with publications about Dr. Sappington researched and written by Dr. Hall.

The museum is open daily for self-guided touring.